According to the latest investigations by the DRAMeXchange research division of TrendForce, the increase in server orders in 2Q20 took place due to the gradual easing of supply chain disruptions from the COVID-19 pandemic. ODM server orders increased by about 20% QoQ in 2Q20, although work resumption at some overseas server assembly lines yet remains lower than expected, in turn constraining the overall server unit shipment performance. TrendForce estimates the QoQ increase in server shipments in 2Q20 to be about 9%.

TrendForce Senior Analyst Mark Liu indicates that North American and Chinese cloud service providers are still the dominant drivers in the server market. Server demand in 1H20 has primarily benefitted from applications in the pandemic-driven stay-at-home economy, such as teleconferencing and media streaming. However, as the inventory of ODM server barebones accumulates in 3Q20, CSPs are projected to abate their server orders; server unit shipments are thus expected to either hold flat in 3Q20 or undergo a slight QoQ dip. Looking at 2020 in its entirety, the data center server demand from CSPs is projected to lead to a YoY growth of around 5% in global server shipments.

GCP has conservatized its ODM server orders to mitigate risks related to supply chain disruptions caused by the pandemic in 2Q20. As such, GCP’s demand has slowed down considerably during 2Q20. Following a quarter of adjustments, issues regarding labor and materials at server assembly lines, in addition to supply chain disruptions, have mostly been resolved. Server unit shipments to GCP are therefore likely to ramp up in 3Q20. GCP’s yearly server demand in 2020 will be driven by software optimization and the overall trend for servers to be manufactured to client-specific specs. Server orders from GCP are likely to grow by almost 20% YoY in 2020.

Due to pandemic-induced delays in server component deliveries as well as pressure from the unfinished recovery of labor and logistics, server shipments to Microsoft grew by about 10-15% QoQ in 2Q20, slightly below expectations. Even so, Microsoft’s yearly ODM server demand is expected to show a significant YoY growth in 2020, driven by demand from applications such as infrastructure build-out and digital transformation initiatives, which include, more specifically, its existing Office software business and enterprise cloud solutions. Increased teleconference software demand, driven by the pandemic, is also accelerating the transformation of Microsoft’s business model, in turn escalating its purchasing demand for servers.

In spite of the pandemic’s impact on the progress of Facebook’s data center construction, its server supply chain issues are expected to be substantially addressed in 3Q20, with a reduction of server barebones inventory accumulated in 1H20. Server shipments to Facebook are projected to decline by a slight 2-3% QoQ in 3Q20, but the company’s overall operations will remain robust. Facebook has been focusing its infrastructure planning in Asia-Pacific from the end of last year to 1H20. Apart from renovating its North American data centers with new servers, Facebook is also ramping up its data center and e-commerce expansion in Asia. In 2H20, the schedule of server shipments to Facebook’s data centers in Europe will depend on the overall environment. Facebook is expected to increase its server orders by up to 10% YoY this year.

AWS has a more diverse supply chain compared with other CSPs and depends on system integrators to assemble the whole servers that it uses. Quarterly shipments from ODMs to AWS are estimated to grow by 15% QoQ for 2Q20. The global activities of AWS indicate that its new self-build data centers in Asia-Pacific and its colocation demand are spurring server shipments. As companies in Asia-Pacific are accelerating the course of their enterprise digital transformation, the demand generated by their cloud migrations will be the main driving force behind the digital infrastructure build-out in the region.

Because China was first to experience the outbreak of COVID-19, the Chinese market saw a rapid and massive expansion of upside demand related to the adoption of telecommuting and the growth of the stay-at-home economy, thus causing the server demand from Tencent to surge by 30% YoY in 1Q20, which subsequently slowed down in 2Q20, since some of Tencent’s demand had already been pulled forward. Tencent is likely to restart its server procurement in 2H20 in order to adjust the run rate of its servers following the resumption of normal businesses across China. Alibaba’s cloud and e-commerce businesses, as well as replacement of older servers, boosted the company’s server demand, which increased by about 10-20% YoY, in 2Q20. But Alibaba’s server demand in 2H20 is expected to decelerate to some extent. Regarding ByteDance’s infrastructure strategy, ByteDance is working with GDS (Global Data Solutions Limited) for the build-out of data centers in China. It has also significantly increased the number of overseas service points. Nearly one-third of its servers are now located in North America to ensure the smooth expansion of TikTok’s activities in that region. 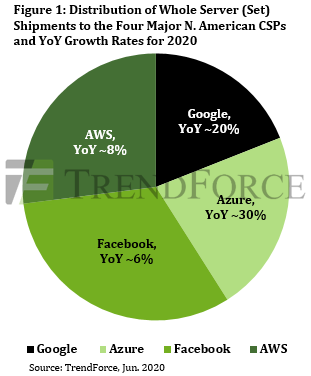 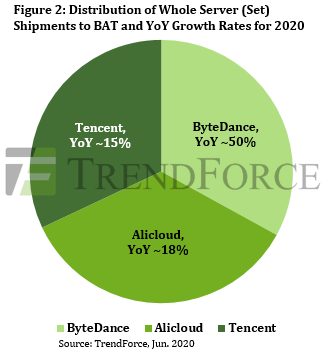