The NAND Flash industry benefitted from strong demand for PCs and servers in 2Q20 as the COVID-19 pandemic caused a demand surge for cloud services and technologies that are related to working from home, according to TrendForce’s latest investigations. This, in turn, kept demand high for SSDs. However, the smartphone and consumer electronics markets had not recovered from the impact of the pandemic. The demand for these products therefore declined compared to the previous quarter. In 2Q20, total NAND Flash bit shipment and ASP both experienced a minor increase of about 3% QoQ, while NAND Flash revenue reached US$14.5 billion, a 6.5% increase QoQ.

NAND Flash suppliers’ revenue performances during this quarter (3Q20) are expected to benefit from the following positive drivers: (1) the increasing tenders for Chromebooks, (2) the stock-up activities related to the next iPhone series, and (3) the SSD demand related to the upcoming game consoles. However, server OEMs and customers in the data center sector are now under pressure to reduce their server barebones and have scaled back procurement. Likewise, PC OEMs currently have sufficient inventory and are turning more conservative in their future outlooks. Furthermore, new Chinese entrant YMTC continues to expand its production output, thus forcing the established NAND Flash suppliers to add new production capacity and raise the layer number in their 3D NAND stacking process. The NAND Flash market is therefore projected to shift to a state of oversupply in 3Q20. With contract prices of various types of NAND Flash products making a downward turn, the total NAND Flash revenue for 3Q20 is now estimated to be relatively on par with the previous quarter.

In 2Q20, Samsung continued to see high demand for its client and enterprise SSDs. However, the pandemic severely weakened demand in the smartphone market and retail channels. Samsung’s bit shipments therefore dropped slightly by nearly 3% QoQ. However, its ASP rose by almost 5% QoQ. Taken altogether, Samsung’s NAND Flash revenue for 2Q20 came to $4.542 billion, which is relatively on par with the previous quarter.

In terms of capacity planning, Samsung is still proceeding with its second-phase expansion of the Xi’an base. Moving to product development, Samsung is steadily raising the output share of its V5 (92L) process. As for the V6 (128L) process, the supplier intends to begin mass production, integration into storage products, and client adoption all within 2020. Production and shipments of V6 products will then ramp up in 2021.

The stock-up demand generated by the upcoming release of new game consoles and the demand for enterprise SSDs were unable to offset downward pressure from declining smartphone demand, leading to a subpar bit shipment performance for Kioxia, which reached a 4% decrease QoQ in 2Q20. Kioxia saw a minor increase in ASP owing to the overall shortage in the NAND Flash market. Kioxia’s NAND Flash revenue came to $2.488 billion in 2Q20, a 3.1% decrease QoQ.

With regards to Kioxia’s capacity planning, although the K1 fab located in Iwate Prefecture has begun contributing output, Kioxia’s total production capacity remains at 490-500K/m. In terms of process technology, Kioxia will continue to primarily focus on 96L products this year. Large-scale migration to 112L BiCS5 products is expected to take place in 2H21.

Thanks to increased SSD sales driven by PC and server demand and to the fact that Western Digital had reduced its shipment to the mobile devices sector in advance at the end of last year, WDC was able to alleviate some of the impact from the pandemic, reaching an 8% QoQ increase in bit shipment in 2Q20. WDC’s ASP remained mostly flat compared to the previous quarter, growing by only about 1% QoQ. WDC’s NAND Flash revenue reached $2.238 billion, an 8.6% increase QoQ.

In terms of production capacity, WDC is continuing to infuse resources into its K1 fab in Iwate Prefecture. The fab is expected to undergo a significant growth in production capacity in 1H21. Regarding product planning, although some 112L BiCS5 products have been shipped to the channel markets, OEMs are still focused on the adoption of 96L BiCS4 products. Large-scale client adoption and increased shipment allocation of BiCS5 products will not take place until a comprehensive planning of product mixes is complete, likely in 2021.

SK Hynix has been successful in introducing its storage products to data centers in North America. As a result, the share of enterprise SSDs in the supplier’s shipment mix grew considerably in 1H20. The supplier posted a QoQ increase of more than 5% in its bit shipments and a QoQ increase of 8% in its ASP for 2Q20. SK Hynix’s NAND Flash revenue for 2Q20 reached $1.694 billion, reflecting a QoQ increase of 17%.

In terms of capacity planning, SK Hynix has not made any major adjustments for this year. Its total NAND Flash production capacity at the end of 2020 will be slightly lower than at the start of the same year, residing in the range of 190-200K/m. TrendForce currently projects that the 96L and 128L products together will account for more than 70% of SK Hynix’s overall NAND Flash output by 4Q20 as the company focuses on reinforcing cost advantages and competitiveness, while 176L products are expected to be launched in 2021.

Owing to the rapidly surging enterprise SSD sales, Micron’s NAND Flash revenue reached $1.665 billion in 2Q20, a 10% increase QoQ, while its bit shipment also grew by 7% QoQ. In addition, Micron reduced its allocation of wafers sold to channel distributors. This, combined with the tight supply in the market, resulted in a near-3% QoQ increase in ASP.

Going forward, Micron will focus on the rapid transition into Replacement Gate products. The first generation will be 128L 3D NAND products, which are already being shipped in small volumes. The second-generation 176L products, which will be Micron’s real focus, is expected to enter mass production at the end of 2020. Micron will be raising the allocation of 176L production on a quarterly basis next year.

Intel, which had been cultivating the enterprise and client SSD sectors for a long time, benefitted from the large number of client orders that were deferred to 2Q20 due to the pandemic. These deferred orders increased Intel’s quarterly bit shipment by 25% QoQ in 2Q20. Unfortunately, price negotiations for these orders had completed in 1Q20, meaning Intel’s ASP remained flat in 2Q20. The company’s NAND Flash revenue reached $1.659 billion in 2Q20, a 24% increase QoQ.

Intel has no plans to expand its production capacity this year, and it will maintain its existing level of wafer starts at the Dalian fab. Intel remains relatively focused on the development of enterprise SSDs and is expected to begin delivering its 144L enterprise SSDs for client adoption and progressively increase their production starting in 2021. Intel’s client SSDs are scheduled for adoption starting in 3Q20. 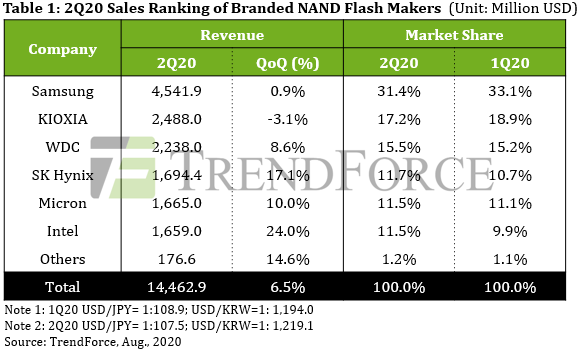