On October 4, 2020, SMIC made formal announcements assessing the Commerce Department’s notification to SMIC's suppliers that they will be restricted from shipping certain U.S.-originated equipment, components, and raw materials to the Chinese foundry, according to TrendForce's latest investigations. U.S.-based semiconductor equipment suppliers, including Applied Materials, Lam Research, and KLA, are expected to bear the brunt of the impact from the latest sanction against SMIC, while Netherlands-based ASML will be affected as well, since its machines contain U.S.-originated key components. By contrast, TrendForce’s preliminary analysis indicates that the export restrictions will likely have less of an impact on suppliers of silicon wafers and other raw chemical materials for semiconductors, since these suppliers are mostly Japanese and European companies.

TrendForce estimates that Taiwanese foundries currently lead the foundry market by occupying a 65% market share, followed by Korea (16%), and China (6%). Occupying about 4% of the global foundry market share, SMIC is ranked first in China and fifth in the world, while being the only Chinese foundry that possesses a relatively clear roadmap for 14nm and more advanced process technologies. Given SMIC’s leadership position in the Chinese foundry industry, the latest sanction, which poses a significantly risk of cutting off SMIC’s upstream supply chain of semiconductor equipment and raw materials, will likely cause considerable damage to the foundry’s R&D of advanced process technologies and China’s efforts at semiconductor independence.

In addition to facing restrictions in equipment supply, SMIC may also see its non-Chinese customers withdraw their orders

Assuming Chinese foundries can source from their domestic equipment suppliers for the 90nm or more mature processes, the export restrictions will primarily impact SMIC’s 12-inch fab expansion plans. Although the foundry is able to continue operating its existing 12-inch production lines in the short run, SMIC will find itself unable to purchase new semiconductor equipment and thus expand its production capacity in the future. In particular, the proposed sanctions may force SMIC to slow down their capacity expansion plans for mature processes (28nm and above) and R&D for advanced processes (14nm and below). Furthermore, SMIC’s non-Chinese clients may, in an attempt to mitigate risks, redirect their orders to non-Chinese foundries, such as GlobalFoundries, Taiwan-based foundries (TSMC, UMC, Vanguard and PSMC), as well as Korea-based Samsung.

According to TrendForce’s research, Qualcomm and Broadcom are SMIC’s two largest foreign customers. They have been using the 0.18µm node deployed at the Chinese foundry’s 8-inch wafer fabs to manufacture their PMICs. On the other hand, they are now requesting Taiwan-based foundries to take on additional wafer input because of the recent events. Regarding the market for 8-inch wafer foundry, demand appears to be outstripping supply as the whole industry is reporting fully loaded capacity. Transferring orders and raising wafer input at non-Chinese foundries will probably exacerbate the undersupply situation and cause prices to keep rising well into 2021. It is worth pointing out that the NOR Flash chips that GigaDevice supplies to Apple for the AirPods are made using SMIC’s 65/55nm technology. Due to the latest sanctions, Apple might be compelled to reassign NOR Flash orders to Winbond and Macronix.

TrendForce further believes that the impact of the sanctions against SMIC will be much greater compared with the adverse effects of the sanctions against JHICC or even Huawei. Although Chinese semiconductor equipment manufacturers have been refining their product offerings through frequent collaborations with domestic foundries in recent years, these manufacturers, unlike their foundry counterparts, still lag behind their dominant global competitors by a massive amount in terms of R&D progress. Therefore, in the absence of key semiconductor equipment from mainstream global suppliers, SMIC will suffer major roadblocks in the continued development of its advanced process technologies, portending the broader impact of U.S. sanctions on the overall Chinese semiconductor industry. 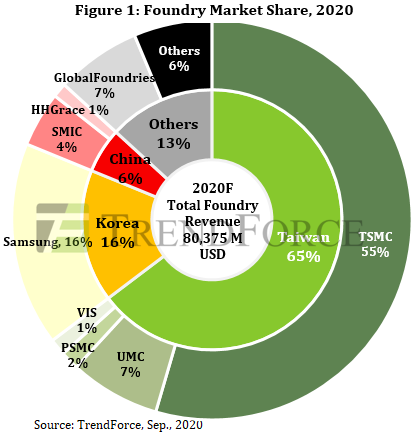