The latest analysis of the NAND Flash market from TrendForce finds that shipments have been below expectations for consumer electronics such as smartphones, Chromebooks, and TVs during this second half of the year. At the same time, demand remains sluggish for retail storage products including memory cards and USB drives. Data centers and enterprise servers represent the only applications that show relatively strong demand. With the inventory level of the demand side steadily rising, the procurement momentum of NAND Flash buyers will become more constrained going forward. The gradual weakening of demand is also relieving the shortage of NAND Flash controller ICs. Taking account of these factors, TrendForce forecasts that quotes for NAND Flash products will begin to fall in 4Q21, and NAND Flash contract prices will register QoQ declines of 0-5% for that period.

Countries in North America and Europe are gradually lifting COVID-19 restrictions as their vaccination rates rise. Consequently, schools and businesses in those countries have also reopened and resumed normal operation. Due to this development, the demand for Chromebooks, which are mainly purchased by academic institutions, has started to slide rapidly. The demand for consumer notebook (laptop) computers has slowed down as well. Among different types of notebook computers, only commercial models continue to experience growing demand. On the side of device manufacturers, the shortages of other types of non-memory ICs are disrupting the operations of ODMs. In particular, the prolonged nationwide lockdown in Malaysia has aggravated the undersupply situation for PMICs. This problem not only impacts the production of PCs and notebook computers but also affects the product assembly capacity of some SSD suppliers.

Additionally, NAND Flash suppliers are rapidly raising production capacity for NAND Flash products that are 128 or higher in layer count. As a result, supply is gradually outpacing demand for SSDs. TrendForce believes that suppliers will become increasingly proactive in pricing in order to raise the consumption of their production output by customers and thus prevent excess inventory. Hence, contract prices of client SSDs are forecasted to make a downward turn in 4Q21 and register QoQ declines of 3-8%.

The demand for major consumer products, such as TVs and tablets, has started to weaken after the conclusion of the traditional peak season of stocking, as well as the gradual withdrawal of subsidization policy from the US. The continuous elevation of the vaccination rate in European and American countries, followed by a progressive mitigation of lockdown measures in various countries and successive resumption of school operations, have yielded an apparent impact to the demand for notebooks and tablets related to education purposes, while the aggravated stocking from the buyers during 1H21 in fear of shortages in NAND Flash controller IC has increased the inventory level and further suppressed eMMC orders. Despite stable capacity for low density 2D MLC NAND, as well as confined supply of NAND Flash controller due to the full load capacity of 28/40nm processes from foundries, the prices have been deprived of support owing to the sizable depletion in end demand, where a prominent decrement of 5-10% is expected for relevant products during 4Q21 after the substantial increase in 2Q21.

TrendForce has downward revised the projections to the annual production of smartphones under the fluctuating COVID-19 pandemic status in Southeast Asia. In addition, the stocking demand for new iPhones and flagships of various brands will gradually decelerate upon entering 4Q21, while the peak season of stocking is soon to be transitioned to the imminent off season. Purchase dynamics of UFS are expected to further subside. Regarding supply, mobile clients are currently using similar layers in products to that of PC OEMs after the spontaneous incorporation of 1xxL by different brands during 1Q21, and the provision of products with higher layers is expected to amplify under PC products’ expansion of market satisfaction and the unmitigated component gaps of ODMs. UFS quotations are estimated to deteriorate by 0-5% in 4Q21 under enhanced supply and diminished demand.

The demand performance for retail end products has been sluggish since the beginning of 2021 aside from the temporal nourishment from the related demand for a storage-based cryptocurrency (Chia) between April and May. Memory cards and USB flash drives have been sluggish in sales since 2Q21 due to the successive exacerbation of the pandemic status in India and Southeast Asia, and the sales of retail SSD from channels have been impeded owing to the shortages of graphics cards, which obstructs the bundling with assembled computers. The fluctuation of cryptocurrency prices, for which the plummeting had slightly improved the shortages of graphics cards at one time, has triggered another recovery in the demand for mining, and further inhibits the sales volume of SSD. It is worth noting that the diverted tendency between end products and upstream components has manifested considerable pressure to module houses.

Pressure from the sales of NAND Flash wafer inventory is expected to gradually magnify for suppliers under the worse-than-expected demand for products such as notebooks, smartphones, and TVs. Few suppliers have signaled their willingness in active provision during 4Q21, though the continuously enlarging void of PMIC has instead entangled the shipment of finished enterprise SSD, which intensifies the sales pressure of NAND Flash wafer. Furthermore, YMTC, WDC, and Micron have initiated an active supply of 128, 112, and 176L product samples to module houses for testing and incorporation. The incorporation of higher layers will further refine shipment cost that will obtain additional room in price reduction for suppliers. 3D NAND wafer is expected to sustain the largest depletion among all product categories at 10-15% during 4Q21. 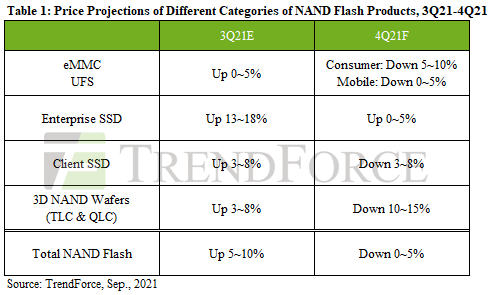