As the global vaccination rate rose, and border restrictions in Europe and North America eased, social activities also began to enter a period of recovery, with the consumer electronics market seemingly ready for the arrival of the traditional peak season in 2H21, according to TrendForce’s latest investigations. At the same time, however, the global supply chain was affected by delays in maritime transport, skyrocketing shipping costs, and component shortages, in addition to already-prohibitive price hikes for certain components in 1H21. Given the parallel rise in both material and manufacturing costs, the market for end products has not undergone the expected cyclical upturn in 2H21. Even so, the overall demand for and shipment of smartphones, notebook computers, and monitors experienced QoQ increases in 3Q21, thereby driving up businesses for major OSAT (outsourced semiconductor assembly and test) companies. For 3Q21, the revenues of the top 10 OSAT companies reached US$8.89 billion, a 31.6% YoY increase.

Certain major OSAT companies experienced a slight dip in their capacity utilization rates due to the ongoing shortage of key components including chips and substrates, as well as the electricity rationing that limited both energy intensity and energy consumption in Jiangsu, Zhejiang, and Guangdong at the end of September. Nevertheless, this dip has had virtually no impact on the OSAT industry because certain OSAT companies shifted their operations to substrate-less packaging technologies and reallocated the previously affected capacities. Hence, TrendForce is bullish on the performance of the OSAT industry in 4Q21.

Market leaders ASE and Amkor registered revenues of US$2.15 billion and US$1.68 billion, which represent YoY increases of 41.3% and 24.2%, respectively, for 3Q21. While both companies had some of their capacities hindered due to the shortage of chips, lead frames, and substrates, ASE had its lead times further extended given that its Suzhou-based fab was affected by China’s power rationing. Notably, as the demand for packaging and testing smartphone APs, network chips, and automotive chips remains strong in 4Q21, ASE and Amkor will continue to expand in the 5G, IoT, and AI end-product markets in 2022.

SPIL is currently aiming to strengthen the R&D operations for advanced packaging technologies at its new fab in Erlin, Changhua, since it will be unlikely to compensate for the loss of smartphone AP packaging business from Huawei in the short run. SPIL’s revenue for 3Q21 reached US$1.04 billion, a 15.6% YoY increase. While KYEC previously suffered lowered capacity utilization due to the COVID-19 pandemic, it has since made a gradual recovery and registered a revenue of US$323 million, a 28.5% YoY increase, for 3Q21, thanks to testing orders for 5G chips from Qualcomm and MediaTek. PTI, on the other hand, primarily benefitted from its DRAM packaging and testing business. The company posted a revenue of US$802 million, a 24.0% YoY increase, for 3Q21. Nonetheless, PTI’s memory packaging capacity will likely undergo a sharp decline going forward, as Intel gradually finalizes the sale of its Dalian fab to SK Hynix by 2025, and the agreement between Micron and PTI regarding the assembly and testing services PTI provides at Micron’s Xi’an fab expires in 2Q22. In response, PTI reallocated some capacities at its new fab in Hsinchu to other strategic priorities such as CIS packaging and FOPLP technologies in 3Q21.

Major Chinese OSAT companies JCET and Hua Tian continued to benefit from China’s pursuit of domestic semiconductor substitutes. The two companies expanded their supply of OSAT services for 5G smartphones, base stations, automotive chips, and consumer electronics. As a result, JCET and Hua Tian registered revenues of US$1.25 billion and US$502 million, representing YoY growths of 27.5% and 57.6%, respectively, for 3Q21. Owing to strong sales by its client AMD this year, TFME recorded a revenue of US$636 million, an impressive 59.8% YoY increase, which represents the highest revenue growth among the top 10 OSAT companies in 3Q21.

Although ChipMOS and Chipbond, which specialize in packaging and testing display panel driver ICs, were affected by the slight drop in small-sized TV panel shipment in 3Q21, they were able to compensate for this loss owing to the gradual increase in packaging and testing demand for such driver ICs as TDDI and DDI. This increase can primarily be attributed to the growing demand for mid- and large-sized TV panels, as well as the ramp-up of OLED smartphone panels, which certain smartphone models began to adopt. For 3Q21, ChipMOS and Chipbond grew their respectively revenue by 32.5% YoY and 29.5% YoY to about US$257 million and US$255 million. At the same time, as IC design companies from the upstream supply chain redirected certain orders to ChipMOS and Chipbond in response to China’s power rationing at the end of September, these two companies will likely reach new revenue records in 4Q21. 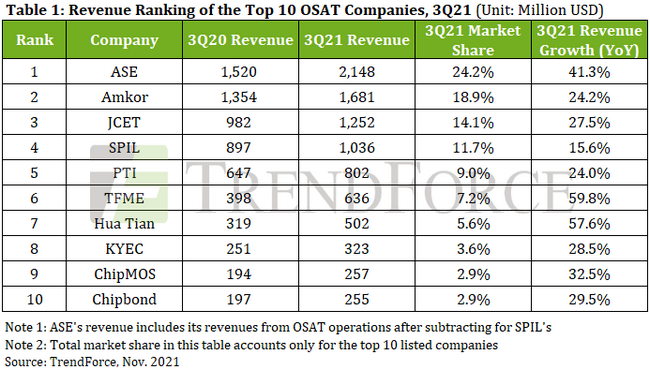