NAND Flash prices for 1Q22 are expected to decline by 8-13% QoQ, compared to TrendForce’s previous forecast of 10-15% QoQ, primarily due to PC OEMs’ increased orders for PCIe 3.0 products and the impact of the lockdown in Xi’an on PC OEMs’ price negotiation approaches. To mitigate potential risks in logistics, NAND Flash buyers are now more willing to accept a narrower decline in contract prices in order to obtain their products sooner. However, as the Xi’an lockdown has not noticeably affected the local fabs’ manufacturing operations, the movement of NAND Flash contract prices going forward will likely remain relatively unaffected by the lockdown.

In addition, TrendForce finds that the daily number of new COVID-19 cases in Xi’an has recently undergone a noticeable drop, and the local government has also announced that that the emergency level has been downgraded. As such, Samsung’s and Micron’s local production facilities are returning to normal with respect to workforce and operational capacity. Samsung’s local production base manufactures NAND Flash products, whereas Micron’s local production base is responsible for the testing and packaging of DRAM chips as well as the assembly of DRAM modules. The impacts of the lockdown mainly relate to delays in the deliveries of memory products to customers. On the other hand, the event has not caused a tangible loss in memory production.

Regarding NAND Flash spot prices, suppliers temporarily suspended quote offering immediately after the event due to concerns about the fallout. As a result, the general decline in NAND Flash spot prices has more or less come to a halt. However, there has been no accompanying signs of spot buyers rushing to procure more products, and the overall transaction volume remains fairly low. TrendForce’s latest survey of the spot market finds that buyers still have plenty of stock on hand and are not in a hurry to procure NAND Flash products at the prices that are currently being offered.

Regarding the contract prices of major NAND Flash products, their overall decline has been narrower than previously expected. For instance, despite the weakening demand for Chromebooks, notebook production on the whole has been improving as component gaps become gradually resolved, while demand for commercial notebooks also provides some upward momentum for the overall shipment of notebook computers. As a result, the QoQ decline in notebook shipment for 1Q22 has been narrower compared to prior first quarters. Furthermore, lower-than-expected shipment of Intel’s latest Alder Lake CPUs, which support PCIe 4.0 interface, has led certain PC OEMs to ramp up their orders for PCIe 3.0 SSDs in order to meet their PC shipment targets for 1Q22. However, SSD suppliers have already begun gradually transitioning their material preparation to PCIe 4.0 SSD instead, thereby creating a gap between the supply and demand of PCIe 3.0 SSDs. As well, the Xi’an lockdown has prompted client SSD buyers to scramble to lock in their required delivery volumes. Taken together, these factors have lessened the decline in client SSD prices for 1Q22 from the previous 5-10% QoQ to 3-8% QoQ.

Regarding smartphones, not only has demand remained relatively sluggish, but smartphone brands are also still holding a relatively high level of eMMC/UFS inventory, meaning these brands are not particularly willing to negotiate prices for high volumes of mobile NAND Flash storage at the moment. On the other hand, thanks to increased orders from PC OEMs since November 2021, NAND Flash suppliers’ inventory levels have fallen somewhat. Hence, the decline in mobile NAND Flash storage quotes has in turn narrowed slightly. Contract prices of UFS products are now expected to decrease by 5-10% QoQ in 1Q22 instead of 8-13% QoQ as previously expected. Finally, contract prices of server SSD and NAND Flash wafers are expected to decline by 3-8% QoQ and 10-15% QoQ, respectively, in 1Q22, in line with prior expectations. 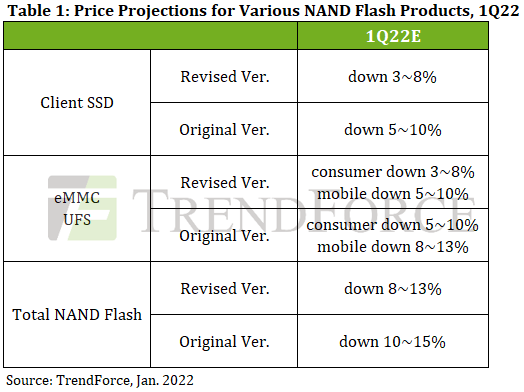