G.Skill rarely lets a lot of time pass in between launching new memory kits, but what is a company to do when it already offers high-speed and high-capacity RAM? Combine them into one, of course. And that's what G.Skill has done—it's getting ready to expand its Trident Z Royal series with 64GB (8x8GB) and 32GB (4x8GB) kits at DDR4-4300 and DDR4-4000 speeds. 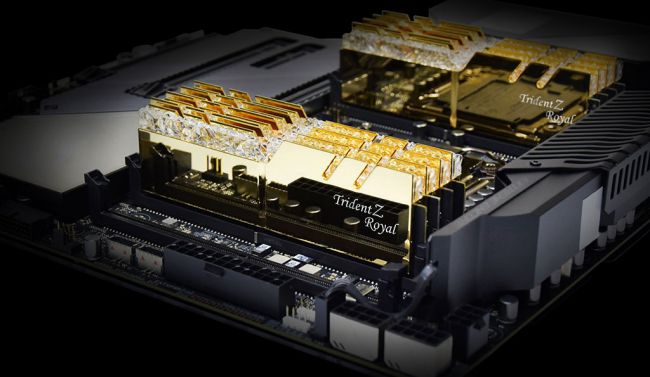 These are likely be some of the last memory kits built around Samsung's vaunted B-die memory chips, which are found on some of the best RAM. The most sought after memory kits by overclocking enthusiasts typically feature B-die chips, but for whatever reason, Samsung stopped producing them earlier this year.

Incidentally, HardwareLUXX reports that the first of Samsung's new A-die memory chips are starting to roll out. It's not year clear if they will offer similar performance to the B-die chips.

Regardless, there are still enough B-die chips for G.Skill to use on its expanded Trident Z Royal series. Given the premium nature of these parts, they are likely to command a premium and see fewer sales than a mainstream kit.

G.Skill typically refrains from announcing memory pricing, since the market fluctuates so much. So, we'll have to wait and see.

The new memory kits will be available sometime in the fourth quarter (October to December time frame).